Hands down, one of the best dining values in Columbus is the Bistro Menu at the Refectory. Served in the old schoolhouse portion of the restaurant on Monday through Thursday, it gives you a 3-course meal for $21 prix fixe. The choices change every two weeks, and for each course, there are two options to choose from. They list the weekly menu on their web site, and for our dinner tonight the choices were 1st course:

When we arrived, we were very impressed by the attention to detail. Both my husband and myself are large people, and without having to say anything or making us feel self-conscious, they switched out the normal armed chairs with more comfortable armless ones before seating us. It was a small touch that meant a lot to us. The ambiance in the place is dark and romantic (which will explain the crappy pictures – this isn’t a place where I was comfortable using a flash, and the low light levels meant really bad pictures. They definitely don’t do the food justice, but the pics will give you a good idea of presentation and portion size – sorry about the lack of detail).

Our server (Eden), was confident and comfortable – she was ever-present without being overbearing, and we never went more than a minute without a refill, clearing away the dirty plates, or her checking in on us. They say that good service should be transparent to the experience, and this was the case for this meal.

Bread service was an herby bread, crusty on the outside and soft on the inside, served with what I think was cultured butter.

We had decided ahead of time to order different things so we could try each of the six dishes offered, and subconsciously ended up comparing the dishes we both ordered. While everything we tried was delicious, my husband made the better choice 2 out of the 3 courses.

For the first course, I chose the quiche, which was served cold with finely chopped tomatoes, red pepper oil, and basil oil. The quiche had pieces of pumpkin and zucchini in it, and was very creamy and uniform. Too often, I get quiche that doesn’t set quite correctly, and ends up too eggy, but that was not the case here. It was a substantial serving, and I was thankful to have a break between the first and second courses. 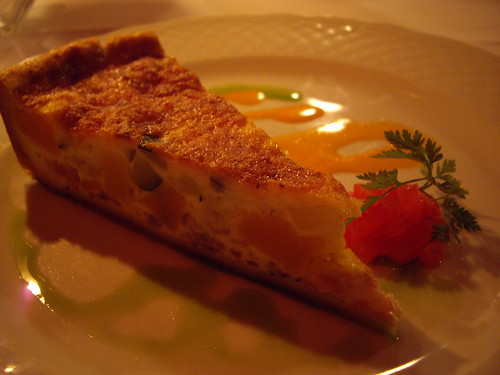 My husband chose the butternut squash soup, which was served with a goat cheese crostini. Neither one of us is usually a fan of squash soups as they are usually made too sweet rather than savory, but this one was savory through and through. While exemplary on its own, the tanginess of the goat cheese and the texture of the crostini elevated this soup even higher. We would order this again in a heartbeat. 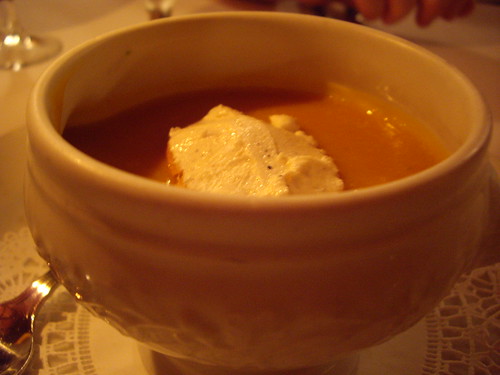 For the second course, I chose the grouper, which was served with a bit of spinach, jasmine rice, and a tomato-herb jus. The fish was cooked perfectly, browned on the oustide while tender, flaky, and moist inside. This was hands down the best fish I’ve ever had in my life, better even than the fresh stuff I had in Florida. I need to find out who their fishmonger is, if I can get grouper this fresh in Columbus, I need to know where! The jus was more of a sauce, but paired deliciously with the rice and spinach, and gave the whole dish a great mouth feel. I would have happily paid $21 for this course alone, it was that good. Very substantial portion as well, with 2 large filets. 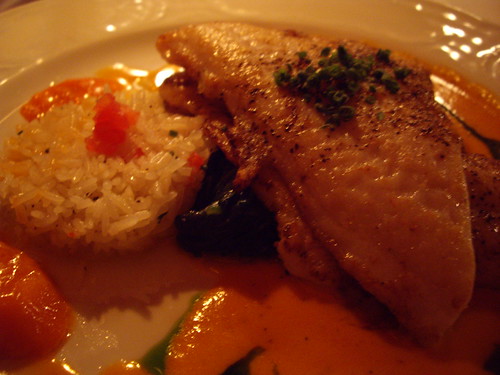 My husband went with the beef tenderloin tips – the flavor on these were spot on, although a few of the tips were inedible due to gristle. I explained to him that this was the nature of the beast when it came to tips, as they are essentially scraps of tenderloin left over from cutting filet mignon, and some of those scraps, especially near the chain, can be a little tough. They did do the best they could given the cut, though, and the madiera sauce definitely saved this dish. The tips were served with rosemary mashed new potatoes and a bit of spinach. 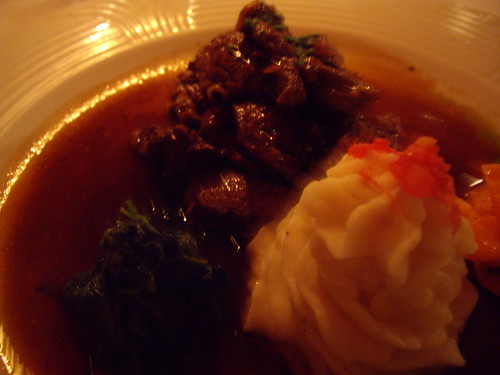 For the third course, I chose the chocolate bread pudding with vanilla ice cream. It was definitely a little more cakier and dense than I expected, but it had a nice chocolate flavor that worked well with the small scoop of vanilla ice cream on top. 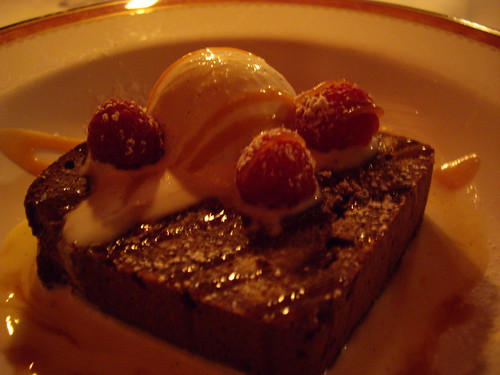 My husband went with the chocolate custard (they had a different name for it, which I can’t remember at the moment), which was the superior choice. It was like a thick pudding, concentrated chocolate evil. A spoon of this stuff could sate a chocolate craving for a month. 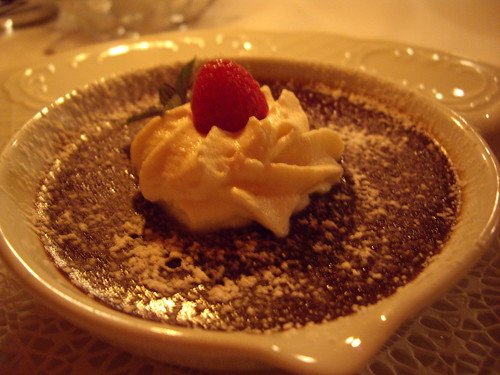 All in all, it was a nice introduction to the Refectory as a whole, and has made us want, for our next special occassion, to do the whole Refectory upstairs experience as well, dressing up and all. And when we do go to the restaurant proper, expect a separate review on that experience as well. As it stood, we felt quite comfortable in the Bistro in casual clothes, and will probably go again anytime the menu for the week calls to us. If you haven’t gone yet, give it a try. Good food, high quality, good portion sizes, great price. They say that this is a “light” dinner, but we thought the portion sizes were perfect. We left having eaten everything on our plates, full but not uncomfortably so, wholly satisfied by the meal we just had.

Also, my husband wanted me to mention that they have an excellent selection of beer, and he had the opportunity to try two beers by the bottle that he had never seen in a restaurant before. Expect a post from him in the future on his tasting notes and impressions on those beers and others he has tried.