As I’ve said previously, we’re always on the prowl for new breakfast joints; places we can go after our Saturday morning farmers market runs, places where we can get off our feet and enjoy a nice meal and each other’s company. After reading the article in the Dispatch about the reopening of Western Pancake House, we knew we’d have to try it. Even though we’re neither old enough nor have lived in Columbus long enough to remember when this locally based chain existed a couple of decades ago, we were familiar with Mr. Joe Skaggs, the owner of the restaurant. We came to know him when he helped his daughter run Zandy’s Pies on Roberts Rd (gone a few years now), and remembered the fabulous pies that we’ve missed since they’ve closed, and went to the restaurant hoping it would be equally as good.

I think everybody in Columbus had the same idea, because the place was packed – standing room only with a steady flow of customers ready to grab a table the second one opened up. I think the crowds were unexpected, because both the kitchen and wait staff seemed to be “in the weeds” – not quite ready to handle the amount of business because of the inordinate amount of time it took to bus a table once it became free. I’m sure once the novelty dies down, it will be a bit less hectic, but you could tell that the employees were exasperated, ready for the day to end.

The menu is unchanged from the previous incarnation of the restaurant, boasting variations on pancakes, waffles and omelettes with a few other comfort food items thrown in. 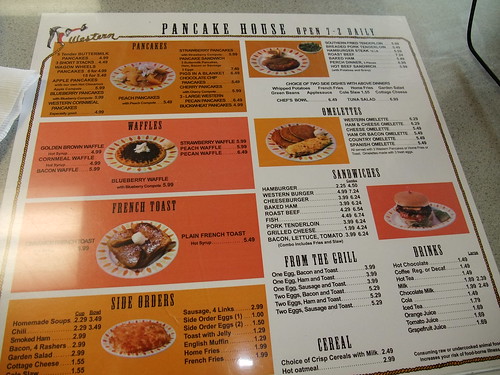 I chose to get a cheese omelette ($5.49), which came with three pancakes. The cheese omelette was standard diner fare, folded over with processed cheese in the middle. While not spectacular (it was a bit cold when it got to me), it hit the spot. The accompanying pancakes were nice and fluffy, and cooked perfectly. Paired with a bit of buttery spread and some syrup, it was a nice end to a long morning. 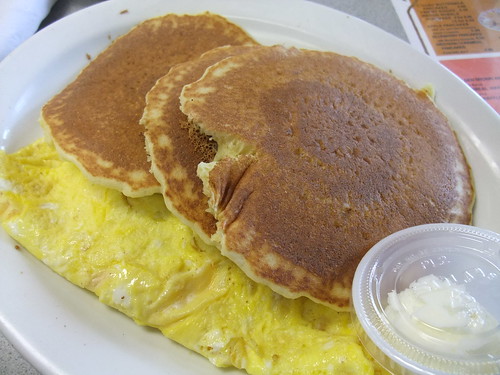 My husband chose the Western Omelette ($6.29), which had bits of ham and pepper in it. He opted for hash browns instead of pancakes, which had a nice crisp to them even though they were anemic in color compared to most. They definitely suffered from a lack of seasoning, and needed quite a bit of salt and pepper at the table to make them good. 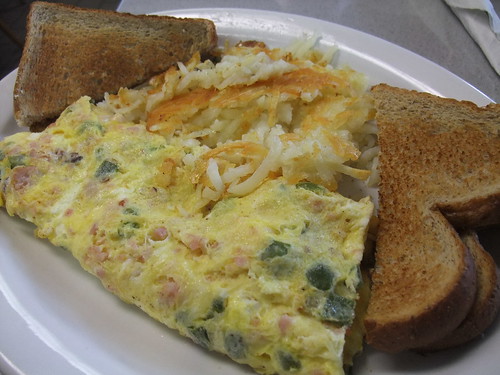 Our other dining companion went for a Pancake Sandwich ($7.49), which is three pancakes with bacon in between, and a couple of eggs on top. While I (personally) prefer that type of meal to be more deconstructed than that (love the individual components, but not so much mashed together), he seemed to love it and ate it with gusto. 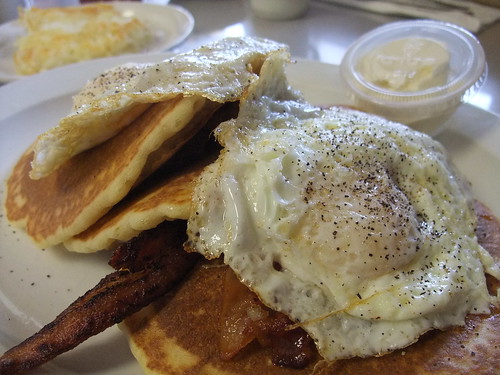 I got a side order of hash browns ($1.99) which suffered the same fate as my husbands: nicely crispy, but underseasoned. 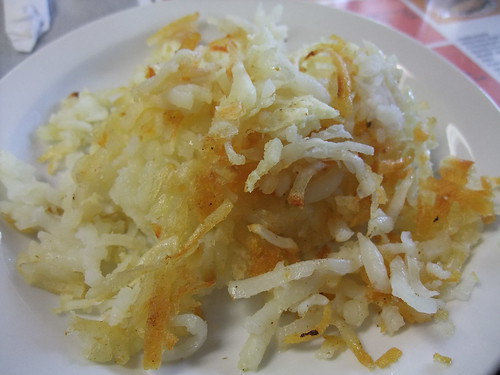 Another side order of bacon (not pictured – $2.99), wasn’t as crisp as I like and a bit salty for my tastes, but still edible.

Service was a bit brusque, probably due to the waitress being overwhelmed and pulled into too many directions at once, but this is probably an opening month hiccup and something that will resolve itself in time as the restaurant gets into a groove where either the traffic dies down or they find a way to handle the demand.

In all honesty, it’s not somewhere we’d see ourselves going regularly. For the most part, it’s mediocre diner fare, at a bit of a premium in price. However, it seems to have already drawn it’s fair share of regulars, so it’s firing on all cylinders for some – just not for us. My best advice is to give it a try for yourself. Our group couldn’t reach a consensus on whether it was good food or not, so that tells me it’s a situation of “to each their own”. Now, if they started making those fabulous pies again, we’d be back in a heartbeat. It’s definitely a missed opportunity.