I’ll be the first to admit that I don’t get downtown nearly as often as I should to dine. As a resident of Columbus’ suburbs, I find it a bit daunting to navigate the downtown streets with its one way streets and parking meters, trying to find parking. So with the goal of forcing myself to get downtown more, I bought a bunch of discounted dining certificates to restaurants all over Columbus, including downtown.

One of the places I bought certificates for was TipTop Kitchen and Cocktails on Gay Street, near Third. I had only been in the TipTop once before, a year prior, for drinks. I had meant to go back, really I had. But by the time I got a hankering to go, it was either the middle of the lunch rush or during dinner time, and I just didn’t feel up to dealing with the logistical issues.

The idea to go to TipTop dawned on my husband and I in mid-afternoon, well after the lunch rush, but way before parking would become an issue. So we headed downtown and promptly found a metered space about half a block away from the restaurant.

It was a beautiful day, clear and in the 70’s, so we decided to eat outside on the cute little patio they’ve got set up there. I think everyone else had the same idea, as no one was inside – everybody was just outside enjoying the cool breeze and probably one of the last nice days we’ll have for a while.

Our waitress was quick, charming and not shy about making suggestions when my husband asked. One of the nice touches I noticed right off the bat was the huge size of the beverages/water that she brought out – no asking for constant refills, that’s for sure!

For an appetizer, we decided on a basket of sweet potato fries ($5), which are served with spicy mayo. These were so absolutely addictive, that I’ll go back if for nothing else but these. Subtle sweet flavor in a nice crispy fry, and they had my heart with the seasoned salt (I’m a sucker for fries sprinkled with seasoned salt). The spicy mayo that they pair it with goes perfectly – my only complaint is that I wish they had just a bit more mayo with it, because even conserving the mayo, I ran out before the basket was gone. Just filling the little Solo cup to the top would make all the difference in the world. 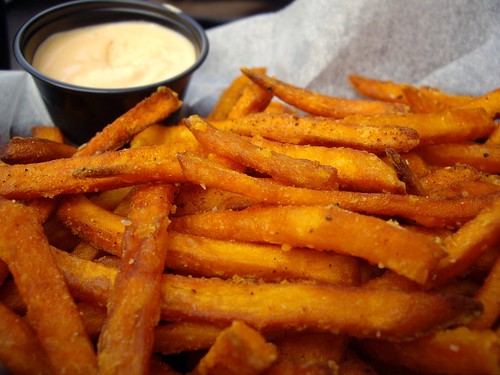 We shared a crock of Spicy Vegetarian Corn Chowder ($5), which had a nice kick to the creamy soup that was loaded with huge chunks of potato and other vegetables. I’m a die-hard omnivore, and let me tell you, I didn’t miss the meat at all. 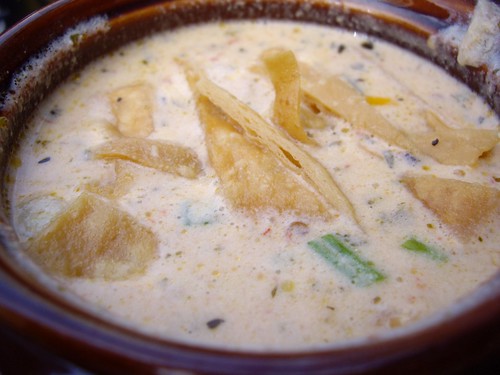 I had originally ordered the Tilapia ($10), which is drizzled in adobo sauce and served with chipotle risotto and steamed veggies, for myself. My husband took a couple of bites and insisted that I trade entrees with him right then and there. He was so smitten with the risotto, and the combination of the fish and the risotto, that he wanted it for himself. His entree-lust was so great that he threatened to order a portion of this to-go if I didn’t trade.

The fish was excellent. Nicely sauteed, with the right amount of browning. The risotto? Pretty freaking amazing. I love a good risotto, and I fell in love with this at first bite. Who knew you could find good risotto in a comfort food joint in the middle of downtown? 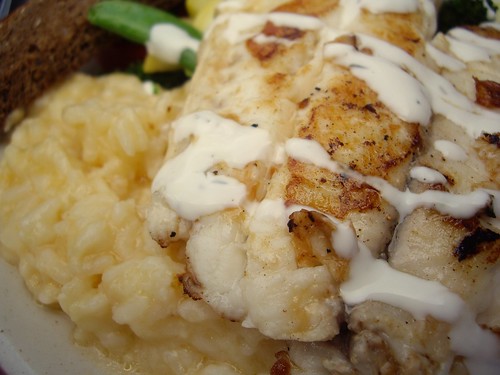 So what did I get in trade for my tilapia and risotto? What did my husband pass up for what was behind door #2? A really freaking good Ohio Style Monte Cristo Sandwich ($10), which he had ordered with potato salad on the side because the eggplant fries we wanted haven’t been available for the past few weeks ::sniff:: The sandwich was a properly made Monte Cristo, unlike the last few I’ve had, which were just plain old sandwiches dipped in a disgustingly thick batter. No, this was beautiful – the only thing battered on this puppy was the bread, as it should be. And in between those battered bread slices was some nicely shaved turkey, ham, swiss and a rockin’ honey mustard sauce. With just a little Smuckers strawberry jam spread on it, I didn’t regret my trade at all.

The potato salad was one of the best I’ve had in a restaurant, because it reminded me of mine – not sweet, very creamy, nice big chunks of potato, and extremely flavorful. 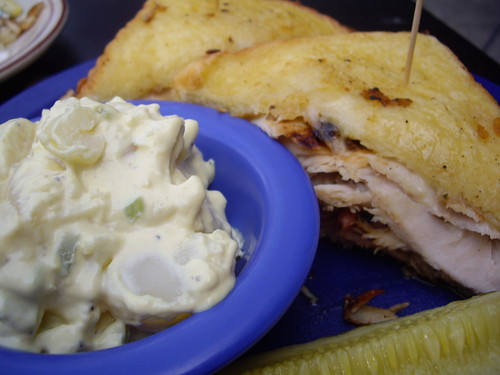 We really wanted to try dessert, but they didn’t have any available, as they had run out over the weekend. If there is any fault to be found with my meal at all, it was the unavailability of certain items, which is a minor logistical issue that is easily overlooked unless it becomes a chronic problem.

Power of Sour at Platform