Have you ever gone to a restaurant, and then, for some reason, never got around to going back again for quite a while? Then, when you finally do return to that restaurant, you wonder why you hadn’t returned for so long?

Last week, we returned after a ten year hiatus to T. A. T. Ristorante de Famiglia. In all honesty, I think the reason we’d avoided returning to T.A.T. was because our last meal there (ten years ago) had been unremarkable at best for both of us — I’d ordered the Baked Ziti With Eggplant, which had been not at all what I’d been expecting, and B. had ordered pork chops (from an Italian restaurant; go figure) that underwhelmed her.

A brief aside, first, about the history of T.A.T.:

The Corrova family, specifically Pete and Philomena, opened their first restaurant in Columbus in 1929 on Goodale Street in what used to be known as Flytown during the Depression era. Due to city planners’ ambitious “improvements” to downtown Columbus, they were forced to move their restaurant… and move they did, to the far east side of Columbus. Eventually in 1980, the family combined all their businesses into a single operation at the corner of South James Road and East Livingston Avenue, where they have remained ever since. On our visit, at least, we noted that the restaurant attracted a much older clientele, probably because they’ve been going there for decades.

The last time we’d dined at T.A.T., we had both ordered entrees that didn’t showcase what T.A.T. does best… this time, however, we decided to dive headlong into T.A.T.’s specialty, which is homey, homely, but satisfying Southern Italian and Sicilian fare.

We arrived in the early evening around 5:30pm, before the dinner rush. Since it was a Sunday, we couldn’t get the Early Bird Special(s), but that was fine; we’d come with a game plan, and stuck with it.

We were seated promptly and our beverage orders were taken. Beverages were brought out promptly. We placed our orders — both of us chose the Sicilian Delight, described in T.A.T.’s menu as a “ten course meal!”. I don’t know if, strictly speaking, it’s a ten-course meal, but it was certainly huge, and exposed us to much of the best of what T.A.T. has to offer.

We were given a choice of a half-pour (3 ounce glass) of either a burgundy, a rose, or some variety of red wine. B. and I both selected the rose, which was brought out presently. It was a nice enough house wine, dry with a hint of sweetness, and very light. 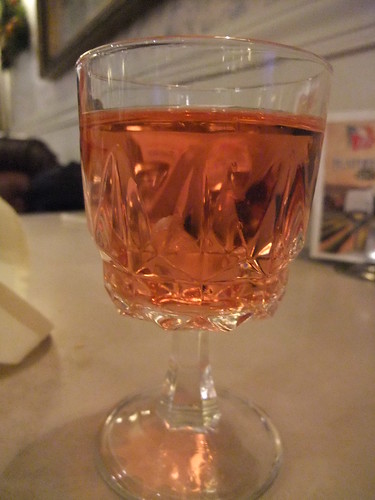 Our server also brought out a bread basket with whipped butter. It was typical Italian bread, crusty on the outside and chewy on the inside. No complaints there. 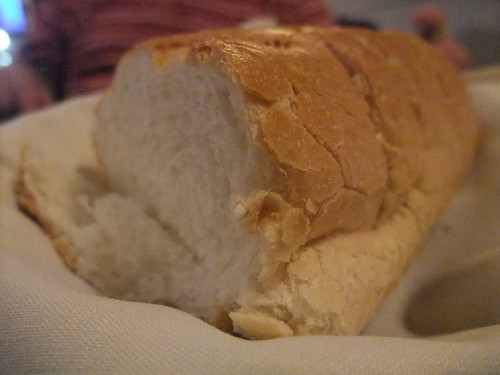 Our first course was the soup; I’d chosen the minestrone while B. chose the Italian Wedding Soup. B. reported that her soup met all the requirements for a proper Italian wedding soup, and was a fairly good and straightforward interpretation of the dish. 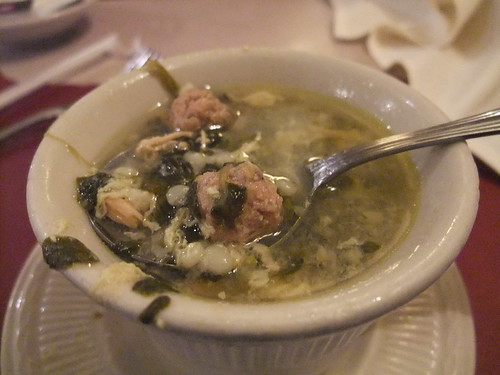 My minestrone was thick with mixed vegetables and a robust tomato broth, and was very satisfying (and vegan-friendly, heh). 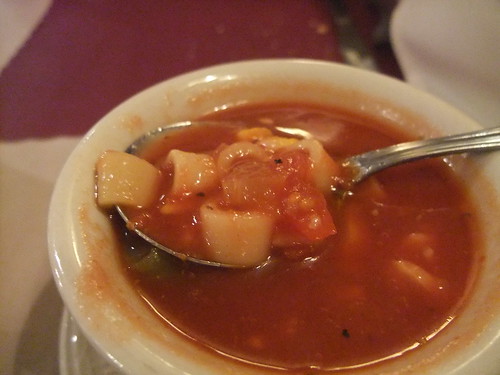 The second course was an individual-sized italian salad. I ordered mine with the house Italian; B. ordered hers with Country French dressing. The salad itself consisted predominantly of bite-sized pieces of iceberg lettuce with some romaine scattered throughout and some chunks of winter tomatoes (read: pale and flavorless; not their fault, tomatoes are out of season). The salad was crunchy enough thanks to the iceberg lettuce. The house Italian (made in-house and in fact bottled and sold through T.A.T.’s takeout operation) was exceptionally good, elevating what would have been an afterthought into a solid little appetizer salad. B.’s Country French selection was definitely a Marzetti product, and as such was quite good though not my cuppa tea. Note that when I asked the server what dressings they had available for their salads, she began to rattle off a list of at least 33 varieties — several made on-premises, the rest typical Marzetti bottled fare. 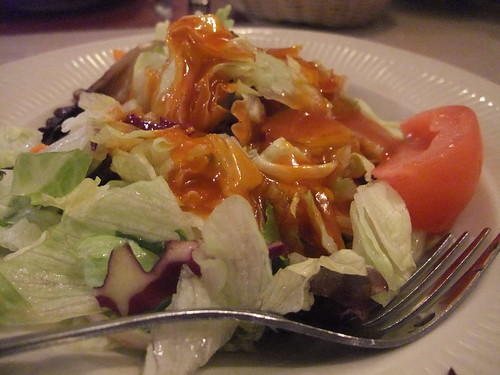 The third course, if it can be referred to as such, was what the menu referred to as “Sicilian bread”, which was a well-seasoned, toasted garlic-and-butter bread made from a loaf of Italian bread split lengthwise then slathered with butter and garlic (probably garlic powder; I didn’t detect any fresh minced garlic) and baked under the salamander until crunchy and brown. It was quite good. 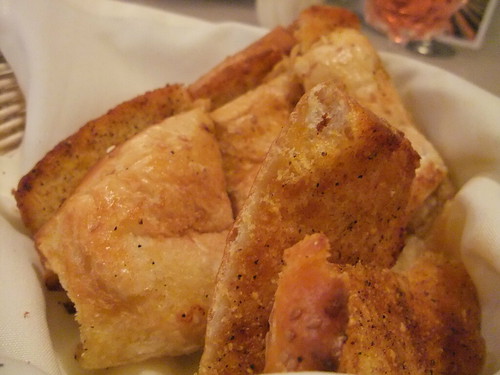 The fourth through ninth “courses” were served together on one large (and I do mean LARGE) plate. These were the homemade spaghetti, the veal parmigiana, the meatball, the meat-filled ravioli, the Italian sausage, and a ricotta-stuffed manicotti. 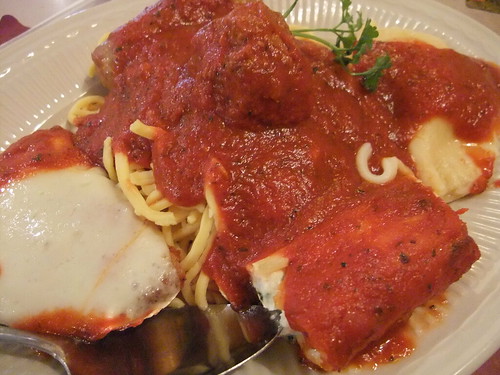 The spaghetti and its accompanying red sauce are both freshly made at the restaurant, and it shows. I’m partial to the onion- and oregano-heavy red sauce, which is thick and tart yet slightly sweet. B. found the sauce less to her liking, but still acceptable. The spaghetti, as mentioned made in-house, are fairly thick strands of boiled semolina pasta. We both noted that the spaghetti was more cooked than we prefer; had we read the menu more closely, we’d have seen that T.A.T. cooks their pasta fully by default and that we would have to specifically request for it to be cooked until al dente. I attribute the restaurant defaulting to fully cooked pasta to its sizable contingent of older diners amongst the clientele; they probably find al dente pasta a bit difficult to chew and/or digest.

The veal parmigiana is a by-the-book presentation of a pre-formed, breaded veal patty baked and covered in red sauce then crowned with melted and browned provolone and parmesan cheeses. It was good but nothing I haven’t made at home just as well.

T.A.T.’s meatballs are a thing of beauty. They are of decent size (between 1-1/2 and 2 inches in diameter) and nicely seasoned. I believe these meatballs are actually better than my old standby for homemade meatballs, Carfagna’s Kitchen.

T.A.T.’s meat-filled ravioli is, in fact, a pierogi-sized pouch of homemade semolina pasta surrounding a simple filling of browned lean ground beef, salt, pepper, and a bit of wilted spinach. Each ravioli is pressed shut using either a handheld ravioli press or, from the looks of it, a fork. It is very large. It is also very good, making Carfagna’s beef-filled mezzaluna pasta pale in comparison. Note that a full dinner order of ravioli consists of four (yes, four) in the house red sauce along with soup or salad and bread service. These ravioli are VERY large, VERY dense, and VERY filling.

T.A.T.’s italian sausage as presented on the Sicilian Delight meal consists of a half-link of their in-house mixture of ground pork. Italian seasoning and a touch of red pepper flakes then pumped into a sausage casing and (for this meal) pan-fried or baked thoroughly. I found the heat from the red pepper flakes to be a welcome addition to an otherwise inoffensive sausage (there appeared to be a total absence of fennel in the sausage mixture, which is NOT a problem for me or B.). B. found the sausage to be too spicy for her tastes.

The manicotti was exactly as advertised — a boiled manicotti tube filled with a mixture of ricotta, egg, and herbs. Nice, but not something that would alone compel me to return to T.A.T.

In addition to the above mentioned platter, we got to choose a side dish as well. B. and I both went with the pickled beets – I thought they were just fine, but B. didn’t enjoy them because she thought they tasted like canned beets. 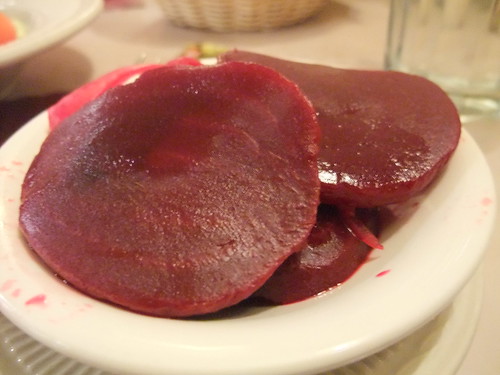 Ever accommodating, the server brought out some cole slaw for her to enjoy instead. While not the best specimen of the dish she’s had, it was a nice palate cleanser to cut through all the red sauce on the platter. 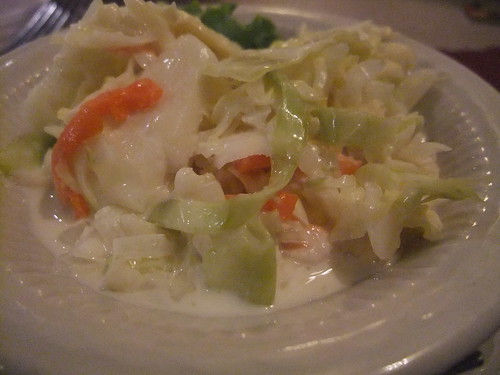 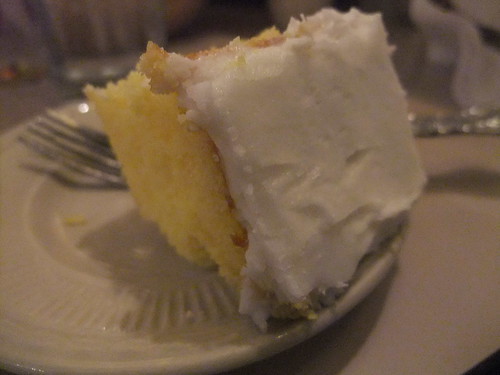 All in all, the dinner represented a fantastic value at $20.99 per person; you get a good sampling of T.A.T.’s available fare without breaking the bank, and you in all likelihood will take some home with you to finish later that night or the following day. B. and I both agreed that we would be returning to T.A.T. to try their other old-school Southern Italian/Sicilian fare.