Well, more like a mini-review (since we have yet to actually go in to sit down and order off the menu, as you’ll see). I was introduced to Smackies by this awesome review on Rosie’s blog. After reading that, I had put Smackies on my short list of “got to try” places and went about my day. It wasn’t until it was suggested as a locale for one of the Columbus Food Lovers meetups that I actually made my way over there to do a scouting mission by ordering takeout. They had been running a coupon special at that time for 2 takeout racks of ribs for $23.99, and we were all over that puppy. The ribs were awesome, so we knew it would pass muster for the rest of the group.

Fast forward a week or two later. Smackies offers a Sunday brunch – starting at noon (and you want to get there *at* noon, as the church crowds start showing up around 1pm, and the place gets real crowded, real fast), and going on until 5pm, they offer a buffet for $13 that blows me away. Pulled pork and brisket, sausage gravy and some of the most tender biscuits you’ll ever eat, black eyed peas, fried chicken and waffles, collard greens and green beans, macaroni and cheese and scallopped potatoes, omelettes to order, killer desserts, and more… Basically, the kind of barbeque and soul food that comforts you down to the core. Food made with love, if you will. We’ve been to the buffet a couple of times since, and it’s one hell of a bargain for the selection and amount of food you get.

But more often than not, we get takeout. And after watching Anthony Bourdain chow down on ‘cue with Uncle Ted last night…well, I had hoped going to sleep would ease the craving. Instead, I woke up with an overwhelming urge to drive across town for the good stuff (yeah, City Barbecue is closer, but it’s not the same, cap’n). It’s basically located in the Mecca of all good foodstuffs, that little island in the sea of mediocrity, Columbus Square – the same place that houses such gems as MiMi Cafe, Nazareth Deli, and Hawa Russia (as an aside: did you lot know that MiMi Cafe now has Vietnamese Beef Stew? I didn’t either…until I stopped in today for some Vietnamese coffee…I’ll try it soon and let you know what I think).

The one drawback to Smackies is that they only make as much as they think they will need in a particular day. Understandable, since the joint is family-owned and operated (and thus lacks the corporate atmosphere of some of the other joints in town). Once they’re out, they’re out. When I got there at 3pm today, they were already out of brisket, cole slaw, and a couple of other items. As the saying goes, the early bird gets the worm. And this not so early bird didn’t get there early enough to get brisket.

I did, however, get there early enough to get the rest of the stuff on my list – a rack of ribs slathered in Whiskey Dip sauce plus two sides for $16.99 with a coupon (pretty good deal considering that a rack of ribs is normally $17.99, and the sides are normally $1.49 each), plus a couple of pounds of pulled pork (extra bark, natch) with some of their new Carolina Red sauce (red vinegar sauce fans, rejoice! This is the real thing – smoky, sweet, puckery with vinegar.) But if Carolina Red is not your thing, fret not – they have about a half dozen different types of sauce – something for everyone!). I chose my two favorite sides – mac and cheese that’s among the best in town, and collard greens that even non-collard green fans would love – the perfect balance of meat, vinegar and heat without a hint of bitterness in the greens. 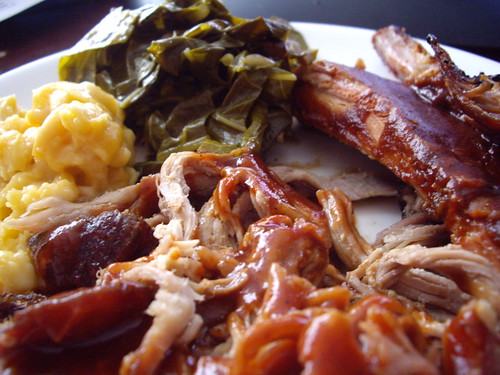 Fat and happy, our ‘cue craving is sated for another couple of weeks. Or maybe at least until the weekend, when we’re tempted once again by their buffet.