With a significant cut in our income, certain luxuries have had to take a back seat and we’ve had to tighten our belts, both literally and figuratively. What this means is that eating out has become a rarity. But we’re always on the lookout for recession specials – deals that are way too good to pass up, and almost too good to share (for fear there will be none left for us). But you readers know me better than that – I’m always willing to share the good information so that you too can partake of the bounty. And it doesn’t hurt that increased business will keep them around for a good long time.

We stumbled on this place yesterday while running errands in the Sawmill/Powell area – it popped for me as a nearby restaurant on Yelp, and a glance at the menu showed it was just the kind of food we were craving.

Tucked away in a newish strip mall along Powell Rd (Rte 750), The Lost Shepherd Tavern is a large space decorated primarily in warm wood tones and brick. Typical gastropub seating, with a mixture of high tables, low tables, and booths.

The menu is fairly large and varied – while primarily sandwiches and salads, there’s a section of the menu that has full fledged entrees, with none (including the twin tenderloins of beef topped with shrimp scampi) priced over $19. And that’s what struck me more than anything about the menu – everything was so reasonably priced, that even if they didn’t offer a myriad of specials, it would still be affordable.

Neither of us were hungry for a heavy appetizer, so we opted to share a side order of their sweet corn risotto ($3) for a starter. In our experience, we’ve found that when a restaurant offers risotto, the quality of the risotto has been a fair indicator of what kind of experience we’ll have with the rest of the food. Never fear, their risotto was prepared beautifully – creamy, just the right amount of bite and seasoning, and as good as the best we’ve had in town. 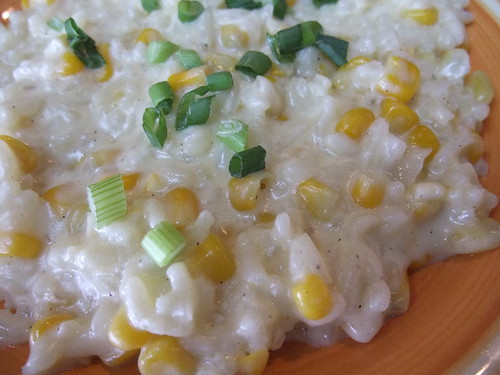 Now, I’m going to tell you about the best lunch special anywhere in town, hands down. For $8, you get a House of Shepherd salad, your choice of any cup of soup, and 1/2 of one of three sandwich choices. Even without the risotto starter, I would have left there stuffed to the gills. Quite literally, getting water as my beverage and tipping the standard 20%, I would have gotten out of there for a little over $10. That’s my kind of lunch!

I chose a cup of their New Powell Chowder for my soup, described on their menu as “fresh sea clams, new potatoes and spinach in a creamy Nor-easter style broth”. This was so unlike other clam chowders that I’ve had, where the clam was an afterthought scattered in what amounts to a creamy bechamel sauce – in their soup, the clam was front and center, and the primary flavor. And there were huge discernible pieces of clam! While very stick to your ribs, it didn’t sit as heavy as clam chowder usually does. It was aggressively seasoned to stand up to the force of the clam, but not so heavily seasoned to render it inedible. 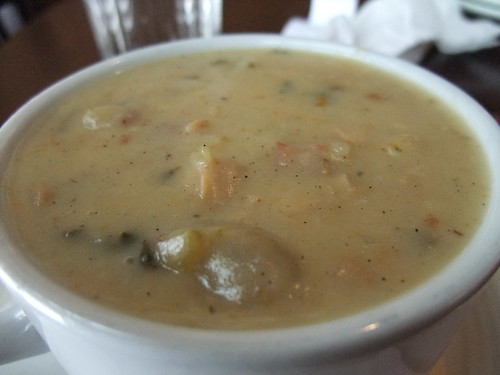 Luckily, they brought out some bread and dipping oil to go with the soup, which helped me get through a very hearty cup of it (can’t imagine eating a whole bowl – you’d have to roll me out of there). Nothing special, but very fresh and just what the doctor ordered. 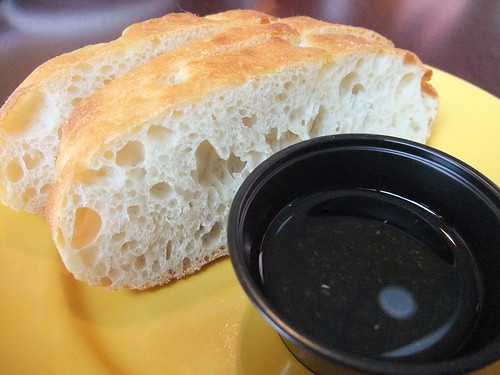 For my sandwich half, I went with the Insane B.L.T.C, which is hands down the best BLT variation I’ve ever had. Imagine crisp Applewood smoked bacon, fresh green lettuce, tomatoes that didn’t taste like winter tomatoes, mayonnaise and a bunch of melted white New York cheddar holding it all together between two slices of buttery grilled sourdough bread. This sandwich alone is worth a return trip to Powell. On the same plate, a nice mound of the House of Shepherd Salad – a nice mix of good lettuce, chopped veggies like carrots, cucumbers, red onion, tomatoes along with bacon and crumbled bleu cheese. I chose to top it with their balsamic dressing, a thick, sweet mixture (think Pastaria’s dressing for a good point of reference) that tied all the varied flavors together. If balsamic is not your thing, they have about a half dozen other choices of dressing you can opt to top your salad with. By the way, don’t let the picture fool you – the portion sizes are huge. My half sandwich was easily the size of whole BLT’s that I’ve had elsewhere. That plate is much bigger than it looks in the picture. 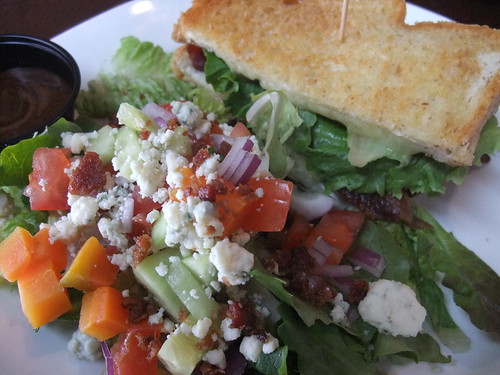 P. opted to get a bowl of their superlative Choice Cut Chili ($4), a huge tureen filled with ground and tender cubed beef, black beans in a smoky but fairly complex (especially since they grind their spices fresh for each batch) thick chili base. Rounding out the bowl is are tortilla chips and a generous topping of white cheddar cheese. We both loved that our soups were served hot, which is a rarity in restaurants these days. A bowl of this hearty chili is an entree unto itself. 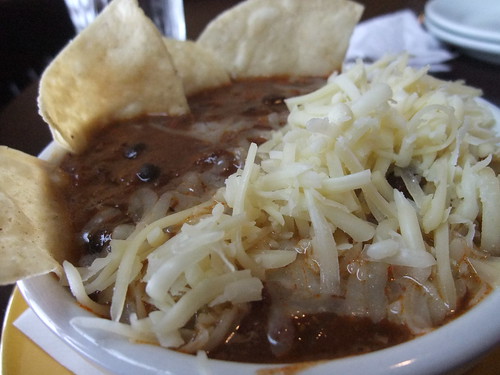 But we’re talking about my husband, who has a bottomless pit for a stomach. He also ordered their Cali-Chicken Cobb Salad ($9), which is a nice bed of mixed lettuce topped with grilled chicken, bacon, tomatoes, red onion, avocado, bleu cheese ad your choice of dressing. He also opted for the balsamic dressing and felt it was a good choice. In a city where it’s difficult to find a good Cobb salad, we were surprised to find that this was one of the most credible interpretations we’ve been able to find in this metro area. Good, fresh, clean, distinct flavors and balance make this salad a winner. 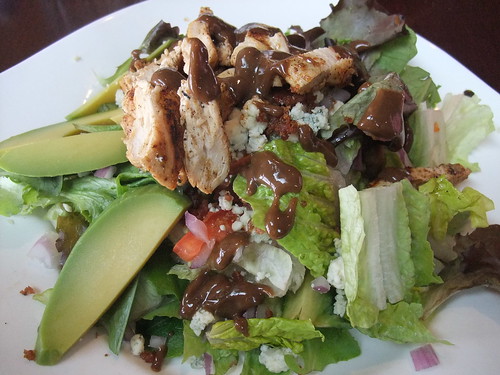 They have a great beer selection (P. was quite pleased with the draft selection of the month, a glass of Kentucky Bourbon Barrel Ale that was smooth and not particularly hoppy, with notes of oak and vanilla that paired well with his salad.

Keep an eye out for specials – they regularly have half price happy hour specials on beer, and one of their other impressive specials on Wednesday is a small order (depends on your definition of small – their small is still plenty big for me) of fish and chips plus a a pint of Smithwicks or Miller Lite for $5. See a listing of all their other specials here, and be sure to take a moment to print out one of their coupons that will get you $10 off a $25+ check.

I was pleasantly surprised by The Lost Shepherd – great service, generous portions, food made with care, and excellent value mean that we’ll return again.

Pleasures of the Cup: Ohio On the Rocks