We’re always on the lookout for reasonably priced ethnic “blink and you’ll miss them” restaurants, so we were surprised to find out that we had one such gem right here on the West Side of Columbus.

Located well off the beaten path (if you’re coming from downtown head down West Broad until you see the Home Depot right past 270, and then hang a left there at Grener Road and it’s about a half mile down on your left side), it’s hard to discern that it’s little more than a Latino supermarket from the outside. But inside, most of the space is occupied by tables, with grocery items being only a small part of this operation. The cuisine at Los Galapagos is primarily Ecuadorian, and as far as I know, is the only one of its kind in Central Ohio.

There were so many things to choose from, we had a hard time deciding. Take a gander at the menu board and you’ll see what we mean: 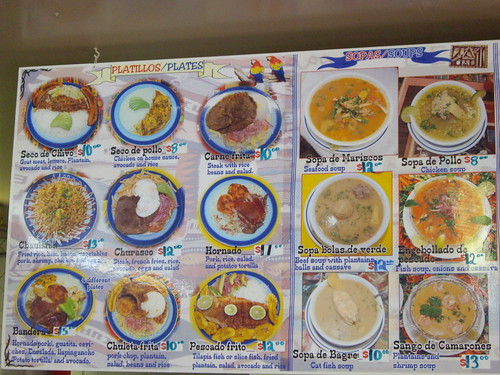 And if that wasn’t enough to choose from, there’s another one just as long: 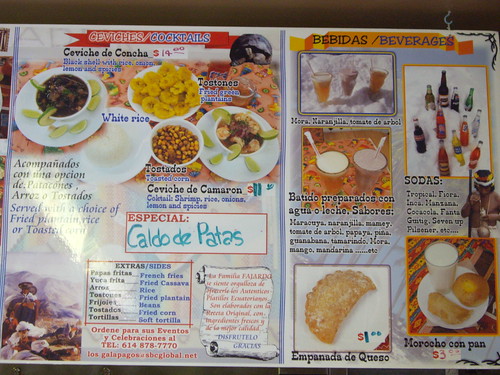 We knew for sure that we wanted empanadas ($1 each), which were not exactly what we expected, but good nonetheless. Cheese empanadas I have had in the past have been filled with melty cheese that oozes out when you bite into it, but with this one the cheese seems to be attached to the dough itself, causing it to puff out and the center to be sort of empty. 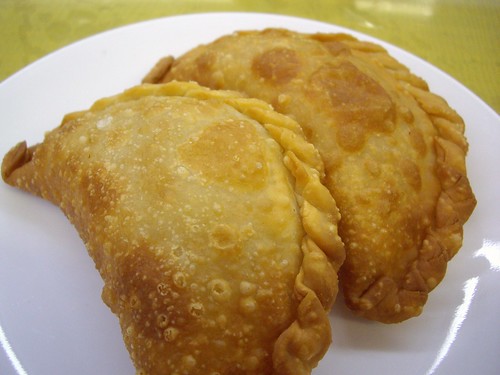 We filled the center a little bit with some of the spicy sauce on the table – not quite a salsa, nor a chutney, it seemed to be sort of a combination of both. The spice and heat complemented the cheesy dough well, though – we could have easily munched on these all afternoon. And at that price? Why the heck not? 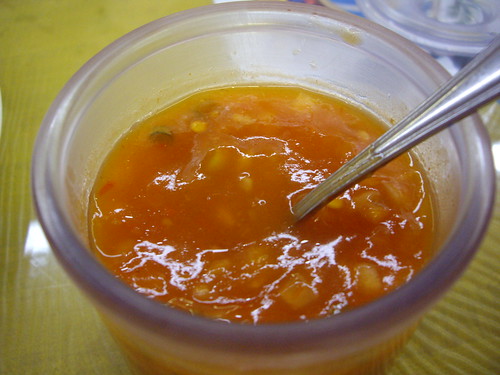 We also decided to share a plate of maduros ($3), which are ripe plantains fried until caramelized. These were absolutely amazing, much better than the other restaurants in town who make these, simply because they were sweet but not greasy. Sprinkled with a little bit of salt to contrast with the sweetness of the fruit, these were perfection on a plate. 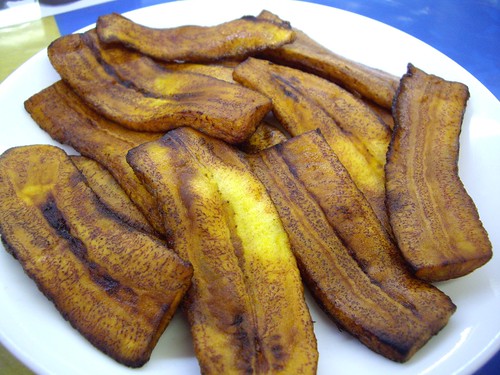 It took a little bit longer to decide on an entree, which I’m sure drove our poor waiter nuts. He was kind, attentive, and quite forgiving of our butchering of the Spanish language when trying to order. I finally decided on the Churasco ($12), a huge platter with a nicely seasoned flank (or perhaps skirt?) steak, saucy and flavorful sauteed onions, peppers and tomatoes, hand-cut french fries, white rice, salad and avocado, all topped with 2 fried eggs. The portion size was way more than I could ever imagine eating in one sitting. The food? Absolutely fantastic. I’m a sucker for just about anything topped with fried eggs, and this was no exception. I’d order this again in a heartbeat. 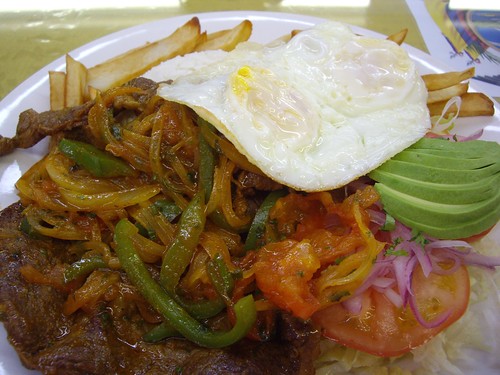 My husband went with the Pescado Frito ($12), lightly fried tilapia filets (you can also choose to have it served to you as the whole fish with head and tail attached, if that’s your thing) that are as good as any we’ve ever had locally. Served with rice, lime, tostones, and avocado salad, it was a completely satisfying meal at a price that can’t be beat. 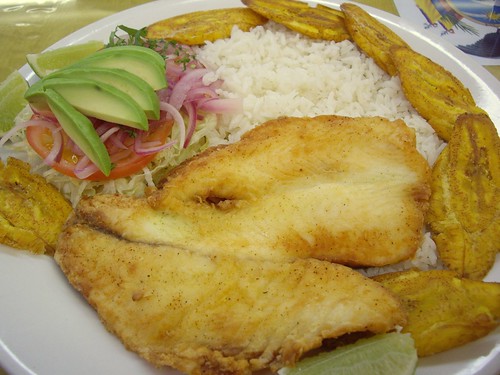 We liked Los Galapagos so much, we plan on going back regularly to try to work our way through the entire menu. Bear in mind the limited hours if you decide to visit – they’re closed on Tuesdays and only open until 8:30PM the rest of the nights. The West Side is hurting badly for good restaurants, and I’m thrilled to have found one so close to home. It’s definitely worth the trip, no matter where you live in the area. We got out of there, full beyond the telling of it, for about $35.