You would think that if a restaurant has been around for 50 years, that they must be doing *something* right. After all, a restaurant couldn’t survive, especially in this economy, without a constant stream of customers, right? And people wouldn’t come back if the food wasn’t good.

That’s why the meal I had last night at George’s All American Grille is such an enigma. Normally, if I have a less than stellar experience, I’ll visit a place twice before posting a negative review. But honestly, the food here was so horrific (and indigestion inducing) that I’d rather eat McDonalds every day for the next month than ever darken their door again.

Always on the search for delicious coney dogs, we took a chance on George’s based on a positive Columbus Alive review and several positive reviews on sites like Citysearch, etc. So our expectations were that they’d be at least as good as the other hot dog joints in town.

Oh, how disappointed we were. This had to be the single worst meal we’ve had since moving to Ohio. Normally, even if I dislike something I order, I’ll finish it because I hate to waste food. I couldn’t finish it, because I started feeling sick about halfway through. The pictures are very reflective of the meal, so be forewarned that they aren’t very appetizing.

First things first – the coneys. We opted for a two coney dog combo ($5.75 with cheese, fries and onion rings). This fell flat in so many ways. The hot dog was of cheap quality and was barely lukewarm. The coney sauce was kind of bitter and tasted like Thanksgiving because there was an overwhelming flavor of sage. And probably worst of all, a huge glop of watery onions were deposited in one area of the dog, leaving it so soggy that it didn’t survive the 5 minute ride back to my house without nearly falling apart. These coneys are supposedly award-winning: I’m curious to know what awards these have won and how long ago, because they were darn near inedible. The fries served with it were super-soggy and quite greasy. The onion rings? Straight out of a bag. 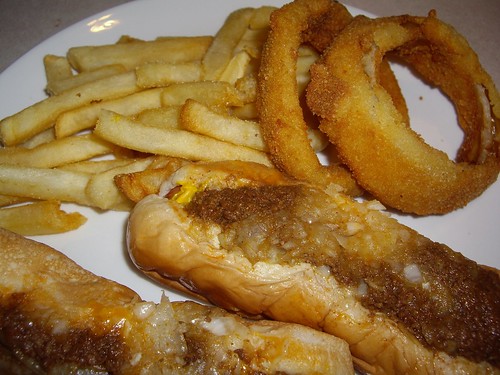 We also opted for one of their “Hillbilly” burgers ($4.55), which was to be a 7 oz. burger topped with coney sauce and cole slaw. If this burger started out at 7 oz, I’d hate to know what the fat content of the meat was – I’ve had double cheeseburgers at McDonalds that were more substantial. The meat was overcooked and dry, and the coney sauce and cole slaw only made a bad burger worse. 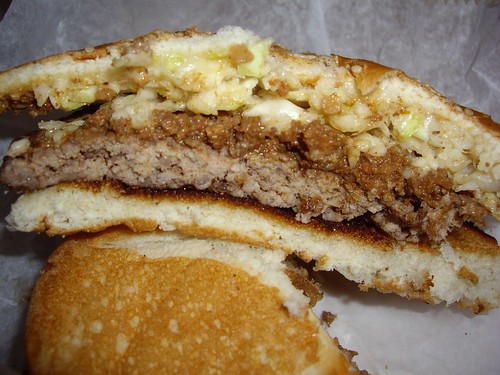 The component of the meal I thought was the worst was one of Paul’s choices – the Grilled Bologna ($3.85). Normally, I’m a huge fan of grilled bologna, but what we got was an absolute abomination. The bologna was of questionable vintage, a watery fine-grained mix reminiscent of Eckrich, which was burned on the outside and barely lukewarm thoughout. Combined with the cheese and pickles? The whole thing tasted almost slimy. My husband said that they weirdly seasoned the meat as well, as it was too salty for him to finish. 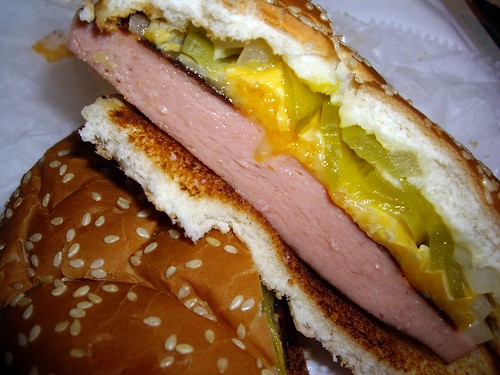 And just about as bad was the “Quadruple Chese” grilled cheese sandwich ($2.95) – if there are four kinds of cheeses in this, it’s news to me – all we saw was a big old glop of yellow-orange gack, reminiscent of Velveeta. Paired with a mealy tomato and rubbery undercooked bacon? Another sandwich we couldn’t finish. 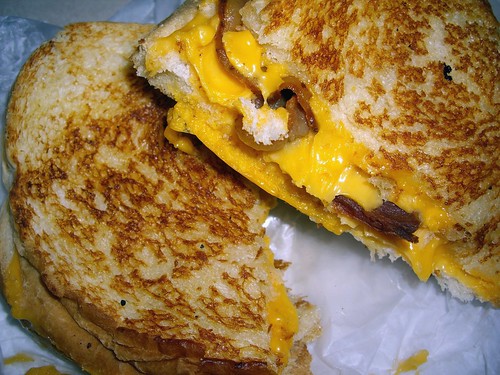 And finally, we got an order of Chili Mac ($4.60 for a large with onions), which is essentially a 4 way by any other name. They must use different chili for this dish, because the chili tasted dramatically different – more of a refried beans/canned chili vibe than the Coney sauce that was on the other dishes. Overall, it was just really odd to my palate, and not in the least appetizing. While it was the most edible of everything we ordered, I still sent it to work with my husband because I was too queasy to finish it. 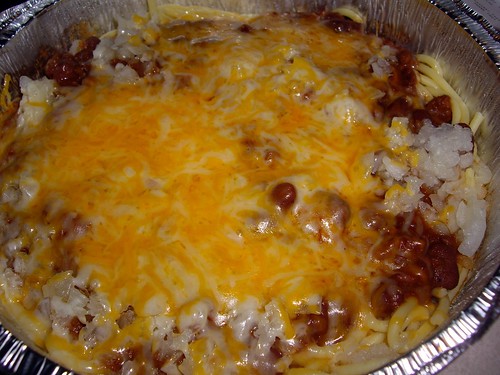 Since George’s is a West side institution with a huge following, I questioned whether or not to post this review – whether or not I should slaughter this particular sacred cow. At first, I thought they just might be having an off night. But after thinking about it for a while, I realized that by batting .000 with my order, this *can’t* be an isolated incident. I’m just not willing to take another one for the team to find out.

Your mileage may vary. But with much tastier (and cheaper!) options in town, I’d suggest steering clear.