Well, it really would be unfair of me to call this a review, since it’s virtually impossible for me to be impartial. I’m lucky enough to count co-owners (and soon to be spouses!) Liz and Harold among my friends, and because of that, will naturally lean toward wanting to see them succeed in all of their endeavors. However, that doesn’t mean I’m above doling out a little constructive criticism, so we’ll just call this a quasi-review with the qualifier that I do have an established relationship with the owners. I’ve been super excited about the opening of Dirty Frank’s, if for nothing else that it was a long time coming. Numerous unexpected delays and additional hoops to jump through meant that the opening didn’t come for nearly a year after its projected opening date.

To say that it was one of the most anticipated openings in Columbus history would be pretty accurate, and it had built up a cult following and considerable buzz before even opening its doors. Part of that is due to the way that the Betty’s Family of Restaurants (BFR) has embraced social media with a vengeance, keeping interested parties up to date via Twitter, Facebook, Columbus Underground and more.

They opened for business on July 1st, with limited hours (they’re on a normal schedule now, open 7 days a week from 11am-2am). They’re located at 248 S. 4th Street (right near Rich, in the old Queen Bee space), and after extensive renovations (and one heck of a pretty ketchup-and-mustard colored paint job), became the cozy kitschy spot it is now. The walls are decorated with paintings of 80’s pop and metal stars, like Michael Jackson, Metallica, etc. done by Liz’s brother Thom Lessner. The music which fills the space is that of unsigned local bands. Every last detail has been thoughtfully put in place, and it shows.

We had stopped in the first time on opening night – it had been a complete madhouse that day, so we decided to wait a bit until things settled down to visit again. Fast forward to almost two months later, when we stopped by midweek in mid-afternoon. We took a seat in the window by the front door.

The first time we visited, they had been out of slushies because the demand for them far outweighed their supply. This time around, we were psyched because there were slushies to be had. I went with the cherry ($2), and Paul went with a more interesting variation called the Hot Rod Slush ($2), in which a habanero-lime syrup is swirled into a lime slushie. Both were quite refreshing, and Paul’s Hot Rod slushie had a nice kick to it, which appeared as a bit of a burn in the back of the throat. 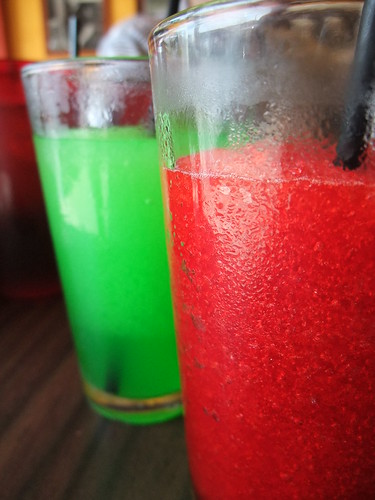 Both the dogs (at $3 each on beef or veggie dog) and the sides ($2) are priced quite reasonably, making a visit to Dirty Frank’s well within just about everyone’s budget. On our first visit, we had tried the Chicago, the Whoa Nellie, the Nikola, the Razzle Dazzle and the Seoul Dog, of which the Chicago and the Razzle Dazzle were our favorites. In an effort to try everything on the menu at least once, we picked entirely different dogs this visit. We both tried each others dogs, too – so after this visit we’ve tried 9 dogs total. For what it’s worth, given the choice between the regular beef dog and the jumbo beef dog, go for the jumbo beef. It gives a nicer meat to bun ratio, and is well worth the cost of the .50 upgrade. In the future, I’d love if Dirty Frank’s offered toasting/grilling of the buns as an option. While I can appreciate a nice soft bun, I prefer a toasted one.

The Ohioana ($3.50 w/ jumbo beef dog) tops the dog with a spicy corn relish (made with sweet corn, jalapeno and pickle relish) on one of their dogs, which is then sprinkled with a touch of celery salt. While it’s a nice crunchy relish, I would love to see a little more kick to it (maybe more jalapeno?) so that the sweetness of the other ingredients would stand out more instead of blending into the background. As is, this topping is a definite safe choice for just about everyone. 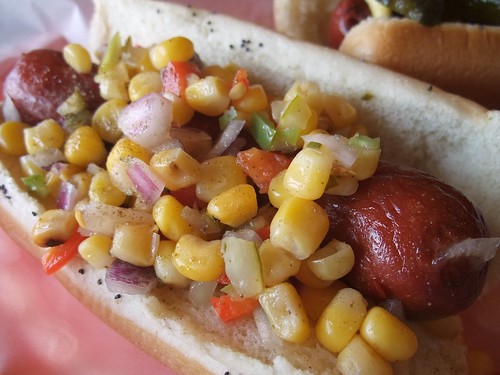 My favorite of all the dogs I’ve tried so far is the Fancy Pants Dog ($3.50 w/ jumbo beef dog), which tops the dog with some Dijon mustard and nice sweet (and slightly “warm” spiced) cornichons. It’s a combination of flavors that I didn’t think I would enjoy, since I’m not particularly fond of pickles, but it somehow works really well. 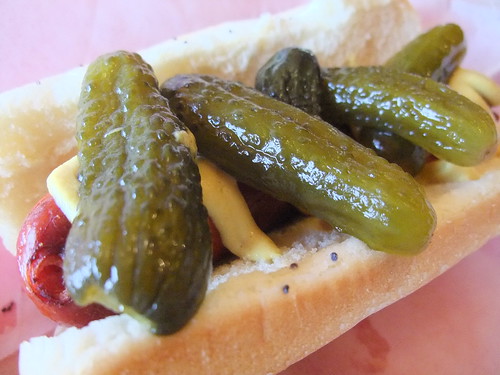 The Tater Tots ($2) are a perfect side for hot dogs, and even more so when prepared “Alex Style” (topped with chili and cheese). 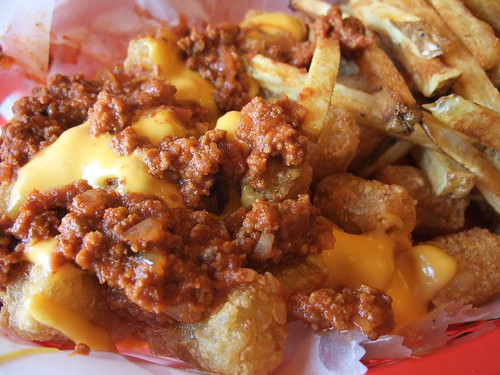 I have to admit, the Fried Leeks ($2) stumped me a bit. I mean, I get the concept and what they’re going after (think blooming onion), but I don’t think it works quite as well in execution. While there were some crispy tasty bits, for the most part, it ended up being a bit greasy and soggy, way messy and confusing to eat (do you use your hands? or a fork and knife?), and way too much waste of perfectly good leeks. It was cool to order it once to try it, but I don’t think that we’ll get this one again. That being said, it does seem to have very vocal fans who order it every time they visit, so it could be a matter of personal preference on my part. 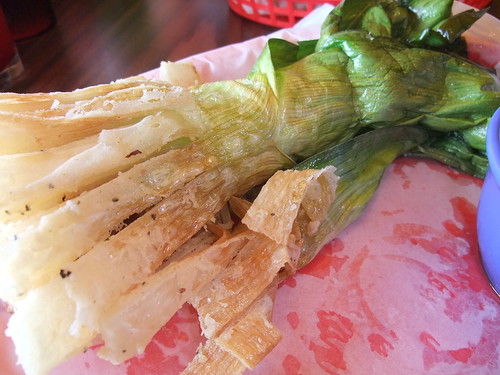 Paul opted to get the Beano Dog ($3.75 w/ beef brat), one of their vegetarian offerings, on a beef brat rather than the veggie dog it usually comes with. To both of us, it was reminiscent of really tasty nachos, and we both enjoyed it thoroughly. Our only wish was that the cheddar cheese on top be melted a bit, which would have made a good dog even better. 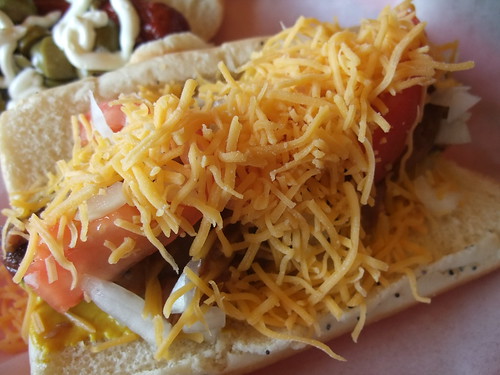 Paul, the olive lover, really enjoyed the True Love Always dog ($3.50 w/ jumbo beef dog), which pairs the combination of green olives and cream cheese. I wasn’t a fan (because I don’t like olives very much), but Paul said the cream cheese cut the brininess of the olives perfectly. It was the right amount of olives with the right amount of cream cheese, and struck a needed balance that pulled it all together. 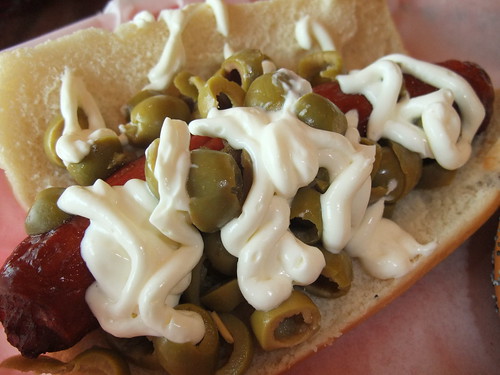 The french fries ($2) here are fresh cut, and were a great receptacle for some added salt and malt vinegar (if you don’t see it on the table, ask for it – they’ll be more than happy to bring you over a bottle). These would also be awesome topped with chili and cheese. 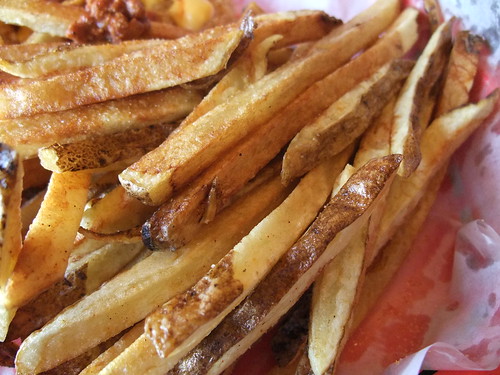 The sport-pepper studded macaroni and cheese ($2) was nice and creamy, and perfectly al dente. I would love to see leftover mac and cheese reused the next day in the form of mac and cheese balls rolled in panko and deep fried. A girl can dream, right? ;) 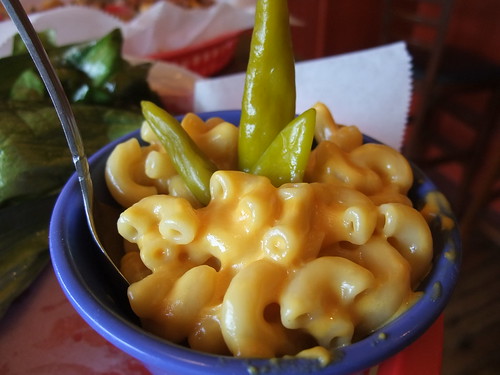 We finished things with a shared funnel cake ($2). While it was a bit flatter and more symmetrical than any funnel cake I’ve had before, the flavor was all there and I really appreciated the light hand with the powdered sugar (too often, you end up wearing more than you eat!). Plus, it’s fun to eat fair food in a restaurant. 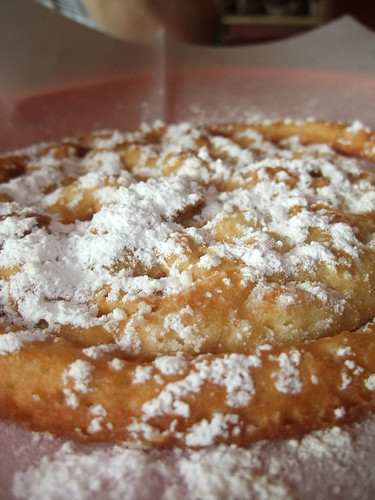 Cocktails at Dirty Franks are fun and imaginative. I really enjoyed the Alabama Slammer on my first visit – it reminded me of hot summers in the late 80’s, back in the days when I did far too much partying for my own good.

I can see why they have such a following – it’s a fun atmosphere, where you ALWAYS see someone you know, it’s affordable, it’s accessible, casual, unpretentious and it’s good. We’ll definitely be back. Often.

A running commentary on many of Dirty Frank’s dogs can be found here.