In every restaurant I’ve reviewed, no matter what the type, I’ve always tried to look at the positives. Maybe I’ve turned into an Italian food snob. Maybe I expected too much. But unfortunately, I was unable to find a single thing about this restaurant that I liked.

Caffe DaVinci is the next incarnation of the long-running DaVinci Ristorante, which operated at the corner of Reed and Henderson on the city’s northwest side for many many years, until the former funeral home it was housed in was knocked down and the entire corner it was located on was redeveloped to accommodate several new businesses. After a brief period of closure, the same owners opened Caffe DaVinci, a casual eatery in Upper Arlington. We had been to the previous restaurant a few times before for their buffet, which was decent, but never for their sit down menu.

When walking into the building, it isn’t immediately clear what you’re supposed to do next – i.e. wait to be seated, go up to the counter to order, etc. so we asked an employee. It turns out that you order at the counter using overhead menu boards, and then they had you a number which you bring to your chosen table (you seat yourself). When your order is ready, they’ll bring it out to you.

If I was smarter, I would have made a lot less assumptions of what a dish is supposed to be and actually taken the menu quite literally. You’ll see what I’m talking about soon.

Service was competent and pleasant, but not outstanding, although it was a different person every time they came up to us. Our only complaint with regards to the service is that there was absolutely no staging on the courses. Our salads came within a minute, and then within 5 minutes we our appetizer and entrees as well. This may be a kitchen issue rather than service issue, though.

For an appetizer, we picked the Blue Cheese Chips ($6.95) – it was described as being potato chips with a blue cheese dressing, so I specifically asked, “by blue cheese dressing, do you mean an actual blue cheese salad dressing?” to which she responded “no, it’s chips with an alfredo sauce and then sprinkled with blue cheese and put under a broiler” – I really should have gone with my first impression because I’ll be damned if those chips weren’t covered with a salad dressing of some sort – hard to tell if it was blue cheese or Caesar dressing, but it had the unmistakable vinegary tang of dressing. And hot salad dressing is just gross. If that weren’t bad enough, in the spots where the salad dressing was ladled, it was overly salty to the point of being inedible. If I’m incorrect and that was in fact alfredo, I’m thanking my lucky stars I didn’t order an alfredo based dish, because I’ve had better out of a jar. The chips that weren’t covered with the dressing or blackened and burned weren’t too bad, though. Unfortunately, at almost $7 a pop, I want an appetizer of which I can eat more than half. 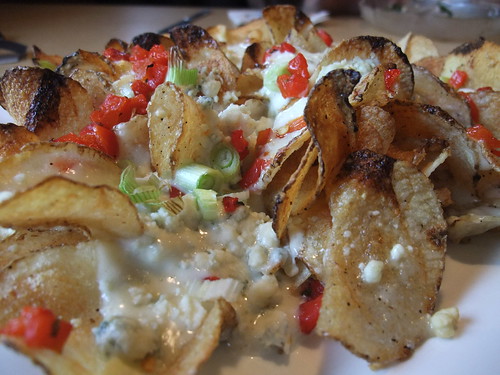 If the appetizer left me that underwhelmed, then I died a little bit inside when I got my entree. I opted for the Risotto alla Milanese ($8.95). Correct me if I’m wrong, culinary types – but isn’t a risotto supposed to be made with arborio rice, take at least 30 minutes, and for a Risotto alla Milanese in particular, be a saffron based risotto? In my mind, I pictured a lovely (but perhaps small) serving of nicely al dente risotto with maybe a little meat sauce ladled over the very center and then sprinkled with a little freshly grated Parmesan. I should have known I was in trouble when it came out 5 minutes after I ordered it, and was red all over, and liberally covered with melted mozzarella. On first taste, I knew something was off. After closer inspection, I realized that this definitely was not arborio (arborio grains are not that long), and hell if I’m not unsure if it was even long grain rice at all – if you click on the picture below and look at the large one, you’ll see that the texture of the rice has the strange rat-bitten appearance of Minute Rice. Mushy Minute Rice at that. And the flavor was so overwhelmed by the red sauce that it was like eating meat sauce straight up. This dish was an insult to risotto. Hell, this dish was an insult to rice, period. This was easily one of the worst things I’ve eaten this year. 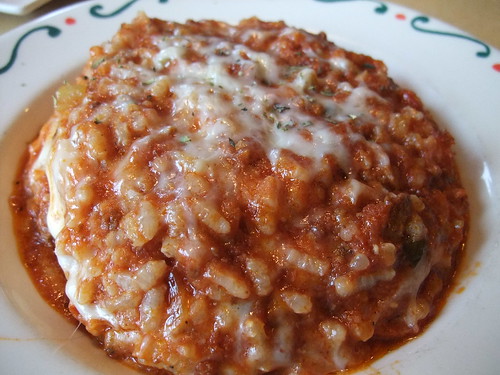 We also had higher expectations of Paul’s entree, the Chicago Style Meatball Pizza ($7.95), which turned out to basically a bread bowl filled with meatballs and sauce and topped with cheese. The outer dough was vasty undercooked, and the innards tasted almost exactly like my entree. The meatballs were good, though – I definitely wouldn’t call this dish a pizza by any stretch of the imagination, though. 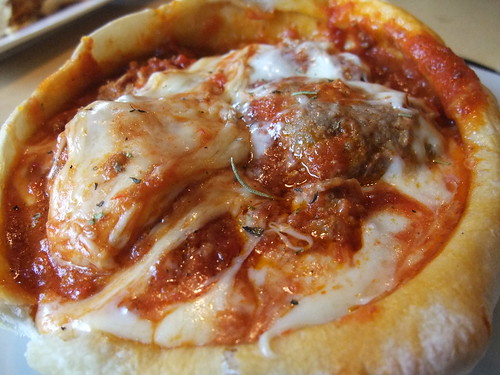 We chose to add a Pronto Side Salad ($3.95) to both of our entrees. While the flavor wasn’t bad, the vegetables and lettuces lacked freshness (the cauliflower, in particular, was black/brown in places), and we felt this was an extremely steep price for the quantity and quality of the salad. 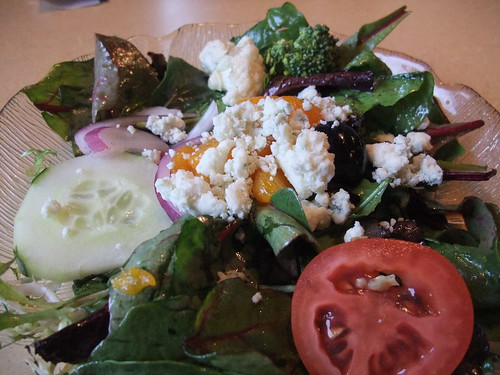 Needless to say, we won’t be returning. And judging by reviews on Yelp and Urbanspoon, most people clearly like it – just can’t say that we’re among them. Whether it’s because we’ve had too much good Italian to pay for bad or that we ordered the wrong dish, we parted with too much of our hard earned money today for horrible food that I’m not willing to take that chance again.