Our first experience with Alana’s was at the Slow Food Columbus United Estates Wine Dinner back in April. We were so blown away by the food after that dinner that we meant to go back to Alana’s right away for dinner; but you all know how life gets in the way sometimes, and it wasn’t until tonight that I got to go back.

We wanted someplace a little more “fancy” than normal, as Paul wanted to take me out to celebrate my birthday, but not someplace so fancy that we would feel the need to dress to the nines. In other words, we wanted good food in an unpretentious atmosphere, and from what I remembered from my experience in April, Alana’s fit the bill. We made reservations last week, early enough so that we could be seated on the patio.

I was feeling in the mood for a cocktail, so I ordered a Watermelon Lemonade w/ Vodka ($9) – a bit pricey, but very refreshing and went down smoothly because of the top shelf Grey Goose. 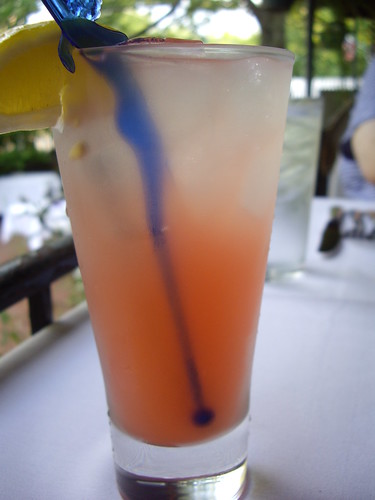 While we were waiting for that evening’s menu to be printed, we decided to split a cheese plate ($15), which included three different cheeses – a Cypress Grove Purple Haze goat cheese, which was incredibly creamy and tangy with just a bit of sweetness; a nice aged gouda, and my personal favorite, a marbled, brandy-washed and cured with grape must Rossini, which I plan on picking up at Curds and Whey at the earliest opportunity. Lovely selection of cheese, and all three complimented and contrasted with each other at the same time. 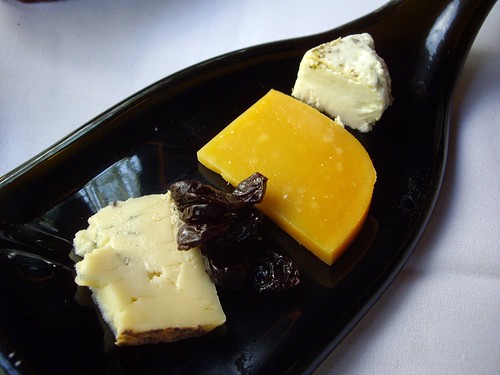 While we were waiting for our starters, our server brought out a basket of bread and some garlic and rosemary infused olive oil. I especially enjoyed the honey wheat bread, which was soft and hearty and sweet all at the same time. 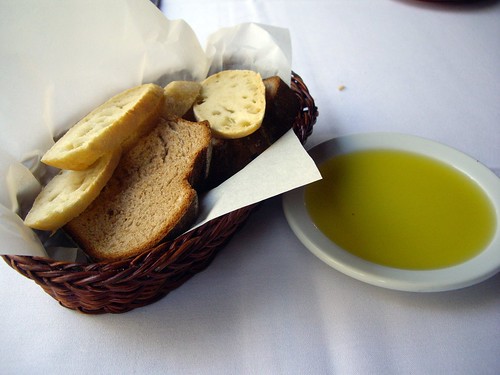 Paul and I shared a couple of starters. Our first was probably the best risotto I’ve ever had, a Creamy Petit Herb and Goat Cheese Risotto ($8) with Brandywine tomatoes that made this dish stand out. Perfectly cooked, extremely filling, and it almost made me wish I had gone with the risotto as my entree rather than the lamb. 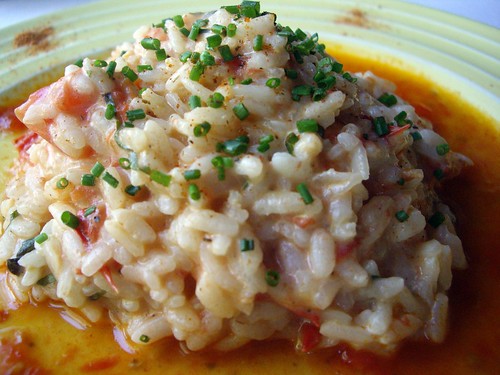 The other starter, Fried Green Tomatoes with Queso Fresco, Chorizo and Corn Vinaigrette ($8) was a celebration of all things seasonal right now – the spicy chorizo, crisp sweet corn, and slight vinegar tang of the vinaigrette offset the fried outer surface of the tomato nicely. 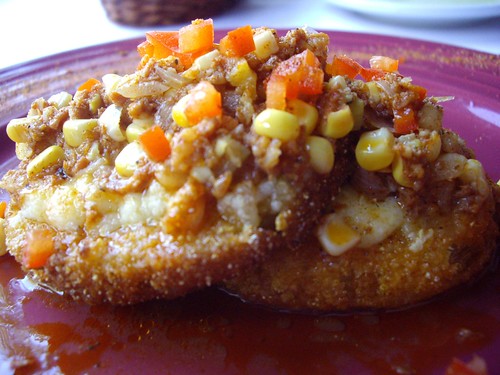 Paul ordered a bowl of Hot Yellow Jubilee Tomato Soup with Smoked Chicken, Queso Fresco and Tortilla Chips ($7), which I tried. This was my least favorite of the dishes. While it was a very credible chicken tortilla soup, the mildness and sweetness of the tomatoes got obliterated by the spice – it was good but didn’t stand out as any different from normal tortilla soup – certainly not enough to justify the high price for a smallish bowl. I guess we just expected something a little more…tomatoey. 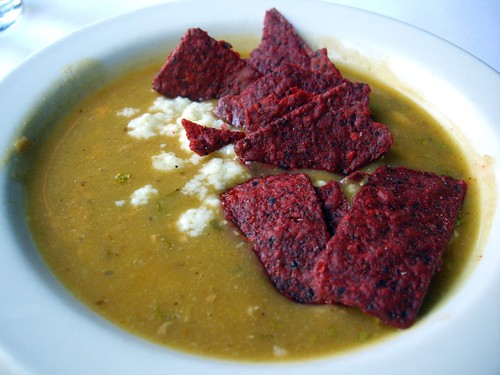 For my entree, I chose the Peppercorn Smitten Rack of Lamb with Wilted Spinach, Roasted Baby Redskin Potatoes and Blackberry Demi-Glace ($22). While it was cooked well, and it tasted as it should, neither the portion size nor the dish itself knocked my socks off, as I had hoped it would. There had originally been a typo on the menu (it said $32 instead of the $22 it really was) – if the price had been the former rather than the latter, I would have felt a bit ripped off. At $22, however, it stung a lot less. I tend to eat protein heavy, and a rack of lamb consists of about 4 bites, tops. I was still a bit hungry after eating my main, unfortunately. 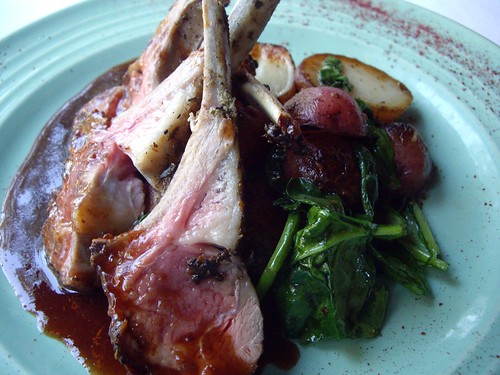 So I started digging into Paul’s, as he was finishing off the potatoes on my plate. He went with the Capellini with Crushed Tomatoes and Lump Crab ($20), which was perfectly cooked angel hair in a nice tomato broth – the menu indicated that the broth was truffled, but if it was, it was so subtle that I didn’t detect it at all. The angel hair was topped by nice chunks of lump crab meat, which we both enjoyed greatly. 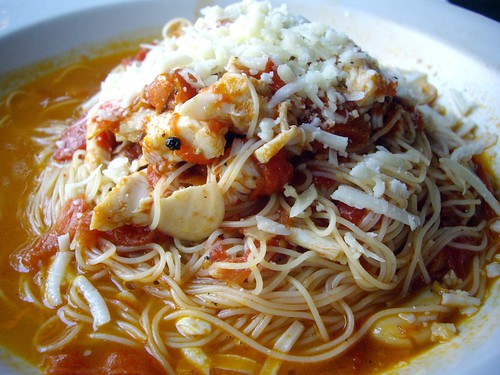 For dessert, we shared one – he says it’s a Violet Orange Creme Brulee, I say it’s a Lavender Orange Creme Brulee ($8), which was so rich and creamy that it was almost ganache-like in texture. The flavorings were subtle, and worked very well in this particular dessert. It was paired with some of Jeni’s Strawberry Buttermilk ice cream, which was absolutely delicious. 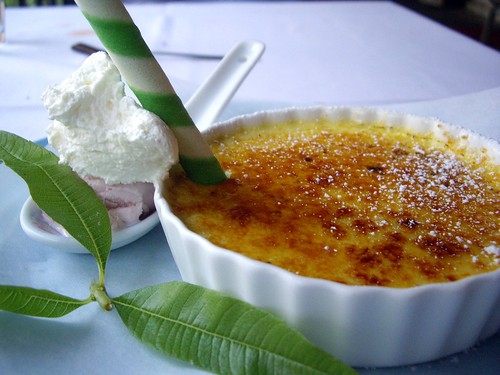 While our budget couldn’t endure regular trips to Alana’s, it’s a nice place to go for a special occassion. Her attention to detail, and use of seasonal local ingredients is to be commended. Her strong area is appetizers, which we loved everything about. Overall, we enjoyed our experience, and eating on her beautiful patio which is one of my favorites in this city. We’ll certainly return again, at least once a season, to see what she’s doing next. Next time around, we’ll even consider opting for the degustation menu.