Since my husband is working from home today, we decided to go out together for a late lunch – it was almost 2:30 before we even made the decision, so most lunch spots were out of the question because they stopped lunch service at 2. After thinking about it for a few minutes, I suggested Juergen’s. After all, it was one of the places that is on my short list to try asap, plus they didn’t close down between lunch and dinner? Bonus.

When we got there, it was fairly dead, so finding parking on the street right in front of the place was a breeze. Since the restaurant was pretty much empty, she directed us to seat ourselves, and we found a nice little two-top table by a window. She let us know that they were out of schnitzel, and only had goulash sauerbraten, and gave us a few minutes to peruse the menu (just an FYI: this is an older menu, some of the prices have increased since then).

All lunch entrees come with a basket of their bread, so she brought out a overflowing (quite generous for two people, actually) basket of assorted breads, including brotchen (rolls), mischbrot (my favorite!), a multi-grain bread with nuts and dried cherries, some butter, and some of their homemade raspberry jam. Yum. I could have munched on bread all day. It was very reminiscent of the breads that Oma (my great-grandmother) bought when I was younger, or ones that she would make herself at home. 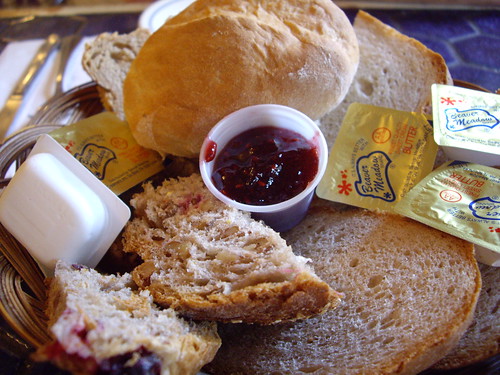 Since they were out of some of the items (and since it was pretty quiet at that time in the afternoon), the waitress (who also does the cooking as well, I think) was kind enough to allow my husband to order a Kraut Omelette ($6.50), which they usually stop making at noon. It was huge and filling and an amazing combination of flavor – it was stuffed with swiss cheese and sauerkraut and bratwurst. It came with a couple slices of canteloupe, which I think is a good thing. As it was, my husband couldn’t finish it in one sitting. 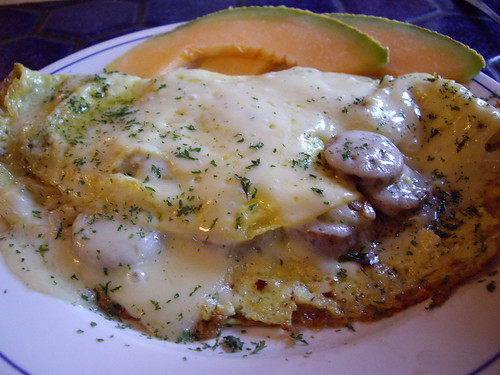 I went for something more traditional, their Goulash Sauerbraten ($11.75), which is a flavorful, sweet and tangy gravy over their tender chunks of beef, served with a bread dumpling. This is pure comfort food for me, and the most authentic I’ve been able to find in Columbus to date. If I didn’t know any better, I could close my eyes and swear I was back in Oma’s kitchen. On tasting it, I knew exactly how they made it, as it is the same recipe my family uses. 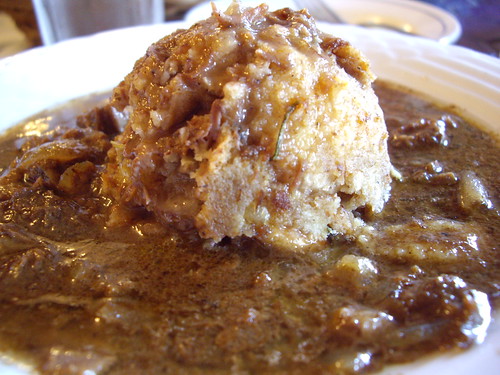 I also got a side order of spaetzle ($2.50) to soak up the extra gravy. Their spaetzle are easily the best in Columbus – substantial dumplings that they pan fry to give them a bit of nuttiness and crisp. 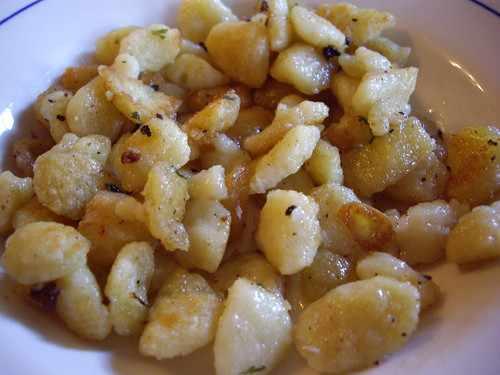 The Sauerbraten also came with their red cabbage, which was a bit sweet for my tastes – next time around, I’ll know to substitute the spaetzle for the cabbage to make the dish exactly how I want it to be. 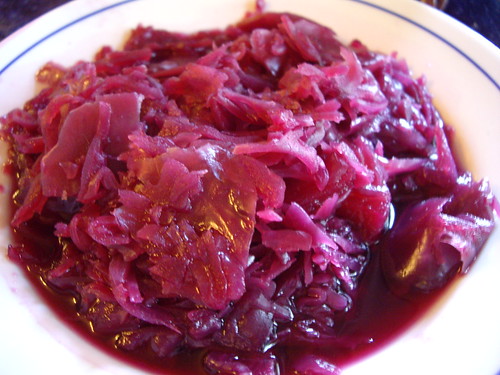 Stuffed to bursting and already at the point where we were boxing up half of our meals, we also stopped at the bakery counter to get a few pastries for later.

This is a little gem of a place, right in the middle of German Village. If you find yourself out that way, walking or driving by the place, take a few minutes to stop in, either for a pastry and coffee or an entire meal. And on your way out, check out their German deli area, which carries a lot of German deli meats I usually have to drive back to New Jersey to get.