Not content to let our little road trip to Lancaster be wasted, we decided to hit a BBQ place that we passed on Rte 22 on the way to our destination. If there’s anything that my husband and I are always down for, it’s a good BBQ joint. Since the places we’ve tried in Columbus so far (City BBQ, Pig Iron BBQ, Hoggy’s, Cook Shack) have been a bit “meh” so far, we were hoping for the best. 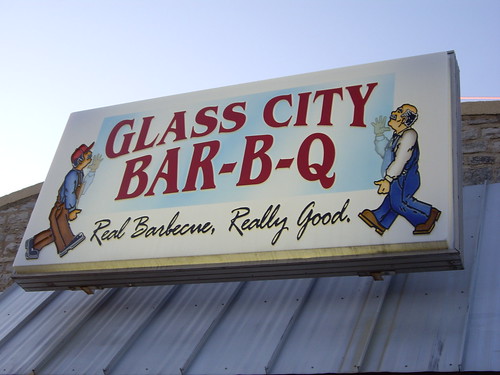 The place was hoppin’, with a bunch of cars and bikes parked out front, and since it was such a nice day, we asked to be seated at the picnic benches on the patio. The clientele were very diverse – you’re just as likely to see a group of bikers as you are a family of 4, and that suited us just fine.

The menu is fairly large, with only a small portion of it being BBQ (the rest was about evenly spread between sandwiches, subs and pizza). On a sad note, neither of our first choices (ribs or burgoo) were available at the time, which the waitress told me is a pretty common occurence. She made no secret of the fact that they run out of items from their menu all the time, and that it pisses regulars off.

So, that being that, we decided from what was available. For an appetizer, we shared an order of the Glass City Fries ($6.99), a pile of fries loaded with cheese, pork, jalapenos, tomatoes, green onions and BBQ sauce. Presentation was really sloppy, and the dish as the whole was just OK – flavors worked together but just barely, and the sour cream wasn’t even necessary. 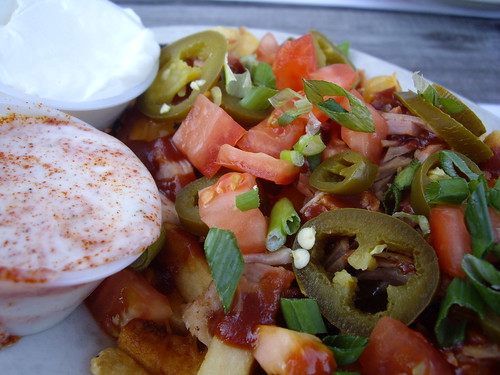 Because they were out of the burgoo, the waitress was nice enough to comp my husband a bowl of chili ($5.99), which was advertised as being a brisket chili. We joked around about the chili being like a New Orleans king cake – if you were lucky enough to find the brisket in there you would have good luck for the rest of the year. The flavor itself was a bit flat – mostly chili powder and just a hint of cumin, and it lacked depth and/or bulk. Passable if you’re hungry, but not very good if you’re a chili connoisseur like I am. 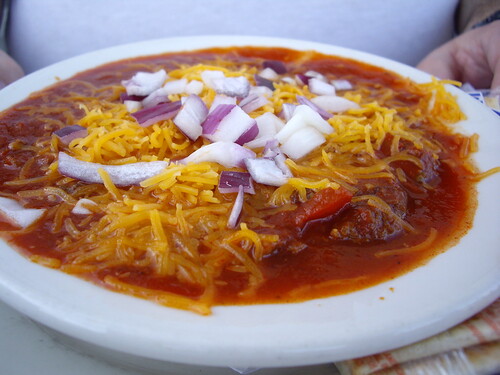 Still, the bits of meat we found in both of the appetizers showed promise, so we didn’t write the place off just yet even though the appetizers were fairly mediocre.

Since my first choice (the three meats platter – chicken, ribs, and choice of brisket or pulled pork for $19.99) wasn’t available, the waitress allowed me to do a modified 3 meats platter (chicken, pulled pork and brisket) for $15.99 instead. While not cheap, the portion sizes were very generous and the platter also comes with two sides and a piece of cornbread. Let me just say that the BBQ is where it’s at when you go to Glass City. The pulled pork was flavorful although a bit on the dry side. The brisket was the best I’ve had outside of Tennessee, with a thick layer of flavorful bark and enough fat to keep it moist. The chicken? Was OMFG good. I’ll go back just for more of that chicken, which is smoked then finished on the barbecue. It was moist, and every morsel was full of that wonderful smoky, barbecued flavor that just screams summertime cookout. The two sides I chose were macaroni and cheese and baked beans. The mac and cheese was spectacular, whereas the baked beans were good, but lacked much of the meat that it was advertised to contain. 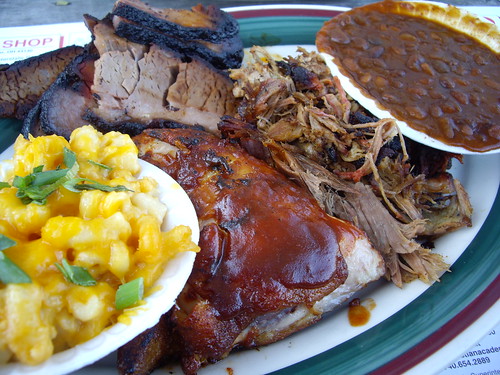 Glass City offers three different types of BBQ sauce – Mild, Hot, and Carolinas. The mild tastes like your average bottled sauce, nothing to write home about. The hot? Is a lukewarm version of the mild. The Carolinas? Oh yeah, now we’re talking. This was hands down my favorite type, sweet and tomatoey and vinegary at the same time. Added just the right amount of pucker and needed moistness to my pulled pork. 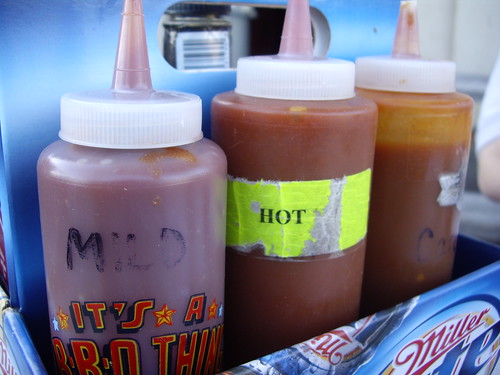 My husband had planned on getting an appetizer sized BBQ sampler as his entree, but since they were out of ribs, that idea went out the window might quick. Instead, he chose two smaller entrees.

First up was an order of 10 wings ($8.18), which he chose to be covered with Louisiana BBQ sauce, a cross between regular BBQ and buffalo sauce. Again, a bit of flavor, no real heat. The wings themselves were tiny, but were first smoked and then deep fried, so they had a depth of flavor that you don’t find in your average wings. Still, definitely not worth the price, which is a bit steep for the size/quantity of the wings. 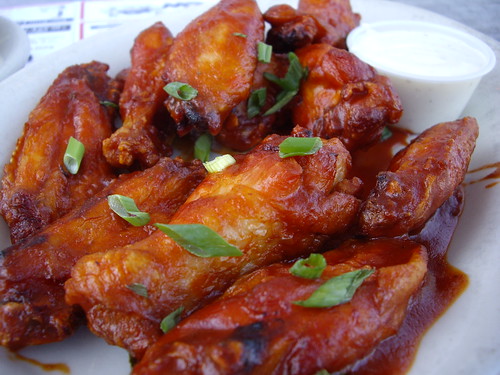 His other entree was an order of Glass City Mini Hamburgers ($7.49), which were advertised as coming with grilled onions and special sauce, which was to be found nowhere. These were flavorful, but dry as a bone, and served on stale rolls. The chips, on the other hand, were great – made fresh to order, and sprinkled with seasoned salt. 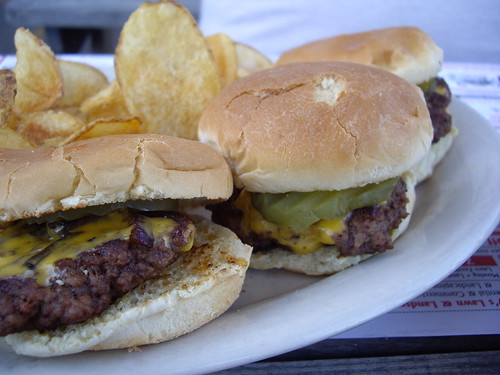 So, in conclusion, if you decide to make the trip down there, or are in the area, do stop in for the BBQ, but steer clear of basically anything else on the menu.